From an early age I just dreamed to have fun, to be careless and free, but in my family workaholism and the pursuit of perfection were very respected. I was 4 years old, I remember it well. I lived with my great-grandmother and great-grandfather in a village.

They were hardworking people who had all kinds of animals that the Bulgarian latitudes have seen – cows, pigs, turkeys, geese and all kinds of ungulates. I was especially attached to the donkey and I suffered when my great-grandfather forced him with a leash when he was lazy.

They had huge acres of agricultural land. Everything was in order. My great-grandmother had arranged the yard in perfect lines, forming beautiful corridors of roses with a divine fragrance. Every morning my grandmother would get me breakfast at 5 and go to work. They worked hard all day long in the gardens, in the graveyard and in the barn …

But I used to run away from home. I was going to the so-called “lazy” neighbors. It was easy to find me. I was constantly there. Why did I want to replace the splendor of a perfectly tidy home with the horribly miserable atmosphere of a backyard with cluttered car parts and tools, dirty tables for months, and a heavy smell of I don’t know what?

Because they were cheerful and carefree, they had fun. They sang, laughed, danced, played. They did whatever they wanted. I loved them!

I had forgotten this part of my biography until my burnout at the age of 31. I had a prestigious profession, I worked hard to achieve my goals at the cost of my sleep. In creative professions this happens often, there are always tight deadlines and nothing ever goes according to the plans. I also had a relationship that I considered successful. After I realized how far I had been from the truth and that excessive jealousy and a desire for control was far from love.

At the same time, I was engaged in scientific work. I was close to a deadline and was in a panic. I wanted to run away. As I ran from the tidy yard, I wanted to get away and have fun. I went out with friends. I relaxed for a while, but the price was terrible. My jealous boyfriend avenged me for several hours of freedom with a cruel scandal. Although there was no physical violence, I was flooded with verbal cruelty that I failed to digest.

The next morning I couldn’t get out of bed. Really. My body was stiff as in a coffin. And at the same time I was worried, I was deadly worried, I was missing everything – deadlines, work. I couldn’t move, I just laid there and worried. There were terrible scenarios in my head. The worst thing was that no one believed me that I could not move. I was known in a different light, as an active and vital person. I was alone in my thoughts and I wanted to die. To end this suffering once and for all.

In the second week of my torture, I contacted a psychiatrist. The diagnosis was burnout, which had led to an anxiety disorder. He prescribed me an antidepressant. I also had a prejudice against ‘the happy pills’ and I was afraid of getting addicted to them. But I had no choice. Imagine 2 weeks without a minute of sleep. I couldn’t sleep at all. It turned out that my opinion about antidepressants was totally wrong. Modern pharmacology was quite advanced in this aspect. I only had to drink them for 4 months and then I stopped them without problems. There were no side effects. He also recommended psychotherapy. My therapist paid special attention to how stress affected me and helped me find strategies for dealing with it. In short, for the first time I was taught how to rest and take care of myself. I calmed down days after starting the therapy. I was already capable to sleep, I could eat and I survived. But those two weeks cost me my job, my plans failed. As for my boyfriend, I didn’t want to see him again. I was all alone again. 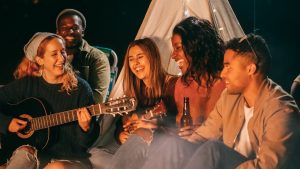 Then a friend of mine called me suddenly. She needed help with a project looking for volunteers, creative people to write texts to promote a project. At first I declined the offer. I was at the bottom. I didn’t have any self-confidence. But after a few days of thinking, I decided to go despite my fears and insecurities. I went there and looked like a student on the first day of school. Insecure, timid, I was down. People looked at me strangely when they read my biography. There was something controversial between my appearance and my professional experience and past positions. I spoke quietly and uncertainly. I started timidly, but no one put much pressure on me either, I was still a volunteer.

Things changed after a company party. It was in the workshop yard. I saw some of the messy car parts and tools from my childhood again. I saw my new colleagues that way: they were cheerful and carefree, they had a lot of fun, they enjoyed life. They sang, laughed, danced, played, whatever came to them. I started to love them!

It was as if I had run away to my neighbors from my childhood again and that gave me strength. I after this party I did my job brilliantly. Everyone saw and appreciated me. After a few months, the project received funding and I was promoted to a responsible position. And that last 3 years. I am no longer part of the team, but I often run to them when I need to have fun and relax.

Parents put a lot of effort into teaching us to be responsible, successful, to always finish the work we have started, but at least for me they had missed the important lesson on how to relax, how to have fun and how to enjoy life. And life is about that – to enjoy it! I learned this lesson in a difficult way. I found a profession as a comedy screenwriter, which fills me with joy every day and makes me carefree even in difficult times.